The PSC is pleased to announce the immediate release of geOrchestra 14.12, 6th version since we’re producing release notes. We’re keeping the pace of a new version every 6 months (within few days) thanks to our developers’ tenacity and support from customer SDIs.

This version seeks to be more intuitive for end-users and easier to integrate for administrators - an outcome of numerous reports and suggestions logged into the bugtracker (600 tickets since October 2012).

An extensive and step-by-step install documentation is available as a companion for first-time installers.

There is now a single window for all predefined OGC services: WMS, WFS, WMTS. 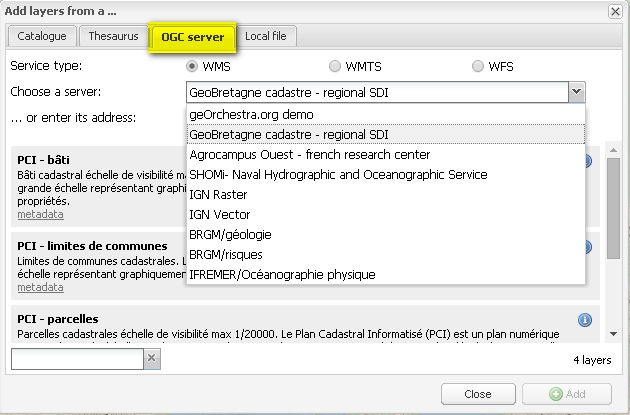 These services can be configured from external files, shareable between instances, or generated by third-party applications. A most practical filter speeds up service discovery.

There is a new option in each layer’s menu to display the layers’ entry points at any time and copy/paste them to desktop GIS.

Full-text search of data series present in catalogues is now possible from the viewer, which can exploit service metadata to discover services which are not described in the data metadata, thus increasing geOrchestra’s compatibility with third party SDIs.

A map context can now be referenced in a metadata from the catalogue.

Contexts are better described: title and summary are displayed on download, and key-word filtering is also an option. Contexts get increasingly used to exchange maps between applications or SDIs (e.g. mobile viewer).

Amongst advanced tools: a geometry from a layer can be used as a spatial filter on another layer. One can for instance extract houses from a given area.

Improved printing: it now supports rotation and PNG export (amongst others). The general layout was rethought to give the map more room.

The viewer could already load specialised add-ons to provide extra functions. Some already use “profile along a line”, “watershed delineation”, “annotation”…
A new add-on activates Google Streetview to display a terrain view or visualise in StreetView.

Also worth noting is the ability to place add-on-generated components (button, tab, form field …) wherever suitable.

On the download side, rasters are now extracted with native resolution when the metadata documents this value. Notification e-mails were improved, too.

Finally, spanish, french, and german, translations are now kept up-to-date thanks to our international branches :)

GeoServer moves to version 2.5.4 (December 2014) with an optional GeoFence support.

Also, system security was tightened especially at the OGC proxy-level.

Moreover, the project now proposes configuration examples as the htdocs directory, and minimal configuration directories for GeoServer and GeoNetwork.

The deployment of a geOrchestra SDI can now be done in 4 different ways (!) :

Development remains as dynamic as usual; OpenHub lists 1250 commits and 12 contributors during the last 12 months (in decrease, however, as automn 2013 was especially intense).

The georchestra-dev list is currently mainly visited by french-speakers with infrequent discussions in english. Feel free to post in your language!

As an outcome of the most convivial geOcom 2014, participants are more numerous and questions become increasingly sharp on the mailing lists. geOcom 2015 will take place in Alsace around June. We’re looking forward to meeting you there!

Please visit the release notes: they contain detailed information about the current update.

Do also have a look at our: